Indivumed GmbH was founded in 2002 by leading scientists with a drive to revolutionize cancer treatment through individualized therapy.

As a physician-led, integrated global oncology company our experts leverage the world’s premier multi-omics oncology database and highest quality biobank to develop a true picture of cancer.
Our three divisions operate holistically with one another for the generation, characterization, and analysis of biologic samples from human cancer patients.

Indivumed is headquartered in Hamburg, Germany, with a US-based subsidiary and a global clinical network.

Since its founding, Indivumed has grown exponentially, our reputation for product and service quality and relationships expanding across the globe. We are always looking to the horizon for new partnerships and methods to support the realization of our vision.

Explore the highlights of our journey:

The Salk Institute and Indivumed have established a strategic partnership to advance research in precision oncology and personalized medicine by utilizing the highest quality molecular and clinical data in cancer.

Investment Plan for Europe: The European Investment Bank (EIB) will provide a loan of EUR 40m to Indivumed GmbH.

Indivumed will collaborate with MedStar Health to advance our understanding of the molecular basis of cancer through collection and analysis of biospecimens and clinical data, making possible new individualized diagnosis and treatment of cancer.

Indivumed announces a partnership with the Indian Institute of Technology Madras to help develop the organization's cancer biobank and database for use in precision medicine research.

Indivumed begins a research partnership with the Medical University of Bialystok.

Indivumed announces a partnership with the University of Rochester Medical Center in New York, USA, to create a new human tissue and tumor biobank.

Indivumed and Geisinger Health System, USA, partner for personalized medicine initiative in the US.

IndivuTest GmbH is founded as a wholly owned subsidiary of Indivumed to provide individualized diagnostics to oncologists and cancer patients as support to select the next beneficial therapy.

Indivumed becomes certified according to ISO 9001:2008.

Indivumed is awarded and funded by the NCI as a research partner to study factors impacting tissue quality.

Indivumed moves to its new facility located at the Center for Innovative Medicine (CIM) in Hamburg, Germany.

Indivumed wins the competition to become a "Place in the Land of Ideas".

Indivumed's US subsidiary is founded with offices in Kensington, MD.

“At Indivumed we are united by a shared responsibility: using our unique expertise and skill sets to work toward individualized cancer diagnosis and treatment for every patient.” 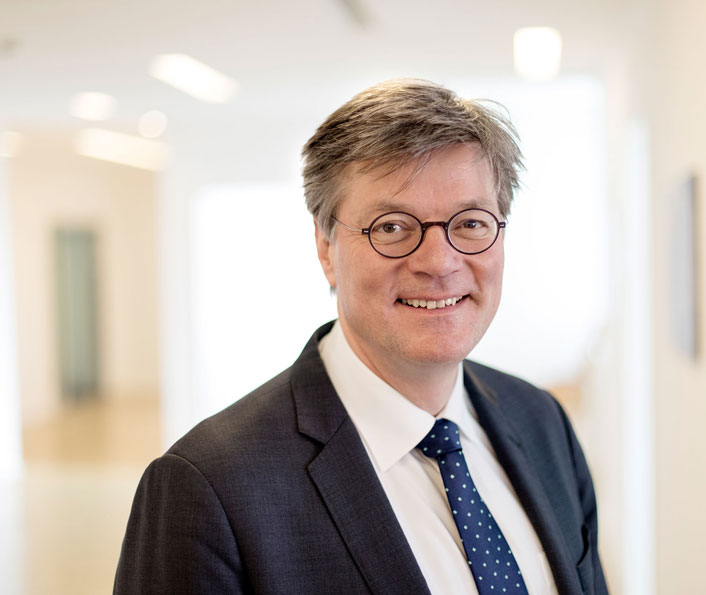 Prof. Dr. Hartmut Juhl is an entrepreneur, surgical oncologist, and world-renowned researcher dedicated to the science of tissue quality and its application to precision medicine in cancer diagnostics and therapeutics. He founded Indivumed to decipher the complexity of cancer and to enable truly personalized medicine.

Hartmut’s career started with studying medicine at the Hamburg-Eppendorf University Clinic from 1979 to 1986. He received his doctorate of medicine (Dr. med.) in 1989 and his “Habilitation” in Surgical Oncology in 1996.

Hartmut holds a professorship at the Medical Faculty of Hamburg University, is an adjunct professor at the Lombardi Cancer Center of Georgetown University, and has served as an advisor to the U.S. National Cancer Institute on matters of tissue quality for clinical and research applications.

He has led Indivumed since 2002 with a visionary entrepreneurial spirit. For this, he has received several awards of recognition.

Together with scientists from Johns Hopkins University, Baltimore, Maryland, Hartmut participated in defining the first Liquid Biopsy technology to analyze circulation tumor DNA in plasma samples. For that, the AACR awarded Hartmut as part of the international multidisciplinary team for the concept of “liquid biopsies” for cancer, which has led to dramatic technological advancements in detecting cancer and has defined a new field in oncology.

Being first in commercializing this technology, Hartmut co-founded Inostics GmbH in 2008, as a subsidiary of Indivumed GmbH, jointly owned with scientists from Johns Hopkins University. Inostics was sold to Sysmex Corp. only three years after its foundation.

Since 2002, Hartmut has been leading the company with a clear vision – every step financially and strategically taken, from the beginning to now, from extending the advanced IndivuServ products and services to building IndivuType, the deepest oncology multi-omics database available today and IndivuTest, directly serving patients and oncologists with scientific data for better therapy selection. All this with the goal of realizing truly personalized medicine in mind.

Dr. Susanne Arbogast brings to Indivumed more than fifteen years of experience in implementing research and development programs in the field of (immuno-)oncology and individualized medicine. This is paired with her extensive expertise in global management of the interface between pharma and diagnostics as well as her broad external scientific network.

Susanne is a fully board-certified anatomical and surgical pathologist with an academic track record of over 15 years.

Prior to joining Indivumed, Susanne held various global senior leadership positions at Roche, where she drove discovery and clinical biomarker programs spanning pharma and diagnostics to enable personalized health-care treatment for patients.
Here, at Indivumed, she is responsible for the Indivumed Global Clinical Network, cooperating with numerous university and community clinics in Europe, the US, Asia, and South America, and continuously enhancing this network with her international team. By establishing and implementing the highest quality standard in accessing and collecting patient samples and clinical data, this network forms Indivumed’s basis to be able to foster an in-depth understanding of the molecular reality.

Dr. Nils Clausnitzer joined Indivumed in August 2019 as interim manager and executive consultant. He leads the IndivuServ Business Unit globally. Based on the company’s scientific roots, he and his team continuously expand IndivuServ’s high-quality sample (from FFPE to liquid biopsy) and service portfolio (ranging from IHC to digital pathology) to accelerate development activities for our customers and partners. He is head of the implementation of our “sample to analysis” strategy.

Nils started his career at the department of radiology at the University Hospital of Eppendorf in Hamburg, Germany, before moving into the industry. Over the last 17 years, Nils’s focus has been on change management to establish comprehensive and sustainable customer solutions in roles of growing responsibility.

Over the course of his professional life, Nils has gained experience across a number of functional areas including sales, marketing, product management, operations, commercial excellence, logistics, service, and business development in the medical technology and diagnostics industries. He studied medicine at the universities of Hamburg and Essen, Germany, and San Francisco, USA, and earned an MBA from the Open University, Milton Keynes, UK.

As Senior Vice President of finance, Gudrun leads and coordinates the group’s financial planning, budgeting, accounting, and reporting requirements.
Before Gudrun joined Indivumed in November 2008, she had worked in several controlling and management positions in various industry segments. Since 1991 she has been working in an international business environment. She was the corporate controller of a German biotechnology company for nine years, where she supported the company’s IPO and was responsible for the headquarters and its subsidiaries.

Gudrun holds a master’s degree in business administration from Westfälische Wilhelms-University Münster. She also completed a stipendiary postgraduate program focused on small and medium-sized business at ITW Berlin.
She brings 30 years of professional experience in finance to Indivumed.

Nils Schumacher brings over 20 years of in-house legal and leadership experience to Indivumed, with a particular emphasis on IT- and data-driven environments.

Nils’s diverse work experience includes having served as a head of legal, an HR director, and a corporate secretary. Prior to joining Indivumed in 2017, Nils headed the legal departments of a VC/PE-financed multinational start-up and an international developer and distributor of software solutions and IT media and worked with an IT business consultancy and a US law firm.

Nils and his team ensure that all of Indivumed’s activities are faultless when it comes to regulatory demands and legal and compliance issues. Nils also serve as an additional contact for investor relations.

Indivumed has established close and long-standing partnerships with leading hospitals, clinics, and biopharma institutes in Europe, North America, and Asia.

The collaboration with these institutions is the basis for maintaining and expanding Indivumed’s high-quality biospecimens, clinical data, and breakthrough research techniques. Indivumed is continually expanding its clinical network in order to provide even better products and services for oncological drug discovery and development programs.